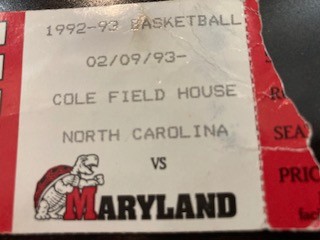 College Basketball and Me: A Love Story

I love college basketball! I grew up in North Carolina where the term “Carolina Blue” is ubiquitous in describing what is otherwise known as “baby blue.” I even met my husband at a University of North Carolina – University of Maryland basketball game (February 9, 1993 – check out the picture of the ticket stub above).

We are now in one of the most exciting months for a college basketball fan — “March Madness.” This is when the NCAA basketball tournament is taking place, where 64 teams compete to be crowned champ. The energy and intensity of the games are palpable (did you catch 15th seeded St. Peter’s stunning victory over #2 ranked Kentucky?)

One of the most significant themes of this year’s NCCA tournament is the fact that the immensely successful Coach Mike Krzyzewski (aka “Coach K”) will be retiring at the end of this season after 46 years of coaching the Duke basketball team. The current associate head coach, Jon Scheyer is scheduled to succeed Coach K. Watching Duke’s emotional and amazing win over Michigan State (allowing them to progress to the “Sweet Sixteen”), got me thinking about leadership transition.

What can we, in the non-profit sector, learn from the retirement of a beloved, long tenured basketball coach? The analogy may be a stretch, but I would argue that those of us committed to non-profits and those of us who love basketball share at least one thing – passion! This passion drives us to want our teams/organizations to succeed in the short and long term.

Many organizations face the same situation as Duke, your Executive Director (or coach) of many years decides to retire. Is it sudden or does a succession plan exist? Does the organization have a candidate from within the organization who has been groomed (or even already named) or will the search for a new director commence?

Succession planning, whereby plans are already in place to transition the organization from one leader to the next as seamlessly as possible is the “gold standard” for non-profits and businesses alike.  Succession planning is well worth the time and energy – having a succession plan can minimize disruption, reduce costs involved in a search, maintain continuity – just to name a few benefits.

College basketball teams have the benefit of having a “deep bench” (pun intended) to choose from. For Duke, Jon Scheyer has spent eight years at Duke, three of those years as the Associate Head Coach. He was named as the successor to Coach K in the summer of 2021. This long runway, so to speak, and transparency about Coach K’s retirement plans provides time for continued training and mentoring of the incoming Head Coach along with opportunities for the key stakeholders – Duke basketball program professionals, fans, students to begin to adjust to the upcoming transition.

While this is the goal, many non -profits either don’t have the time or resources to do this work.

No Succession Plan: Time to Visit the Concession Stand

What, you’ve never heard the term “sorbet” director – that is likely because I made it up – it’s actually more commonly known as an “Interim Director.” Why do I call it a “sorbet” director? If you’ve ever been to a fancy restaurant, you might have been served a sorbet between courses to “cleanse your pallet” before the next course. While many organizations are eager to move forward and secure a permanent replacement, there are significant advantages to appointing an interim director.

Change is hard – for both professionals and lay leaders. It is common and natural to mourn for the ways that the previous director did things (even if stakeholders complained while he/she was doing them). Taking a year to “cleanse” the organization’s “pallet” can help to pave the way for the eventual new director to establish their own style and identity as the memory of the long-serving director fades.

If neither of these options are a match for your organization, conduct a traditional search. Tons of literature exists related to conducting a search process, so I’ll offer a handful of insights based upon both my professional and personal experience with executive director searches.

Prior to starting the search process, reflect on the following key questions:

2.    What history exists related to past leadership transitions? Are there lingering slights or frustrations? Successes to build upon?

3.    What is your organization’s vision for the next five years?

4.    What are the current hot button or priority issues and how will these issues influence the leadership change process?

While the NCAA Tournament will conclude in New Orleans the first weekend of April, for non-profit professionals and volunteers, our quest for the “win” will continue long after the nets are cut down. I believe the same grit, determination, and clarity around the ultimate goal found in a championship basketball team, are also deeply present in our non-profits. This is what I love about basketball and what drives me to work in the non-profit field. So, when our organizations embark upon a transition, let’s aim to follow Duke’s gameplan and set ourselves up for seamless success.

Linda Mann Simansky is a non-profit consultant who specializes in organizational needs assessments, strategic visioning, leading focus groups for organizations and their constituents, and program evaluations.

Stay in the loop!

Stay in the loop!